After a period of silence, the Dragons of game of Thrones will once again fly over Osuna

You are here:
7 September, 2018Noticias/blogBy Jesus 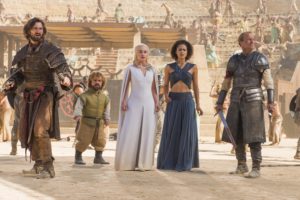 After a period of silence, the Dragons of game of Thrones will once again fly over Osuna

Osuna returns to place of reference and meeting this time for fans and followers of the game of Thrones series produced by HBO, What, How will be remembered, part of its fifth season was recorded in the Bullring in the town.

Now the Villa Ducal is the venue chosen for the recording of the Podcast 200 Ice and fire, which will take place the weekend of the 20 in October this year 2018. For this special podcast, whose number 100 it enjoyed an extraordinary success in Madrid, they will hold some important and attractive theme days, whose aim is to assemble the largest gathering of fans of this successful American television series which has millions of followers in Osuna.

These days, as well as the recording of the live podcast with all the existing public and another series of activities and events, they are organized by "Seven kingdoms", Spanish website specialized in all the literary saga "A song of ice and fire", and its television adaptation, under the most known title of "Game of Thrones", and it has the collaboration of the municipality of Osuna.

Osuna choice for this special edition has been determined precisely because in its centuries-old plaza de toros was recorded the spectacular scene of the renideros of game of Thrones of Meeren, one of the most striking of this series, In addition to that this town has the only museum on game of Thrones that exist in Europe, so-called "Hall of ice and fire", located in two halls of the Museum of Osuna, and that you can enjoy watching a vast amount of material on this series.

But don't want to overtake even the activities scheduled for that weekend of October, to create a greater expectation to keep the element of surprise until the last moment, It is already known that the recording of the Podcast 200 Saturday will be held, 20 October, Although still not unveiled the concrete place of the town. This very day, held a lunch meeting with all fans who attend this event and, in the evening there will be a themed dinner with costumed actors, to which, members of the podcast will also be decked out for the occasion, inviting already from all attendees to also go dresses of characters in a song of ice and fire or of game of Thrones.

In addition, throughout the weekend there will be different types of games, contests, trivials, Board Games themed, etc., It will be used to complement other events, post has announced that there are two unique and special activities that remain, For now, in secret, but that will be revealed in the near future, as well as the schedule and final location and recording of the Podcast 200.

So, It will be a weekend during which fans of a song of ice and fire and game of Thrones will live incredible moments and, Surely, an unforgettable experience that is expected to exceed the expectations of the Podcast 100 and convert to Osuna on the place where the largest gathering of fans of this saga and this from the more different points of our national geography series is held. An event that, without a doubt, It will serve for Osuna remains a reference tourist and so it has a very positive impact on the hospitality industry and the restoration of the town.

Report in “Salud Al Día” Cana Sur TV, 20/04/2019.
22 April, 2019
Bridge day of Andalusia offer 2019. 3 nights for € 500´00
18 February, 2019
IR A …
Subscribe to our blog
This web site uses cookies to enhance your user experience. We assume that it is agreed to accept them, If not you can decline access to the browsing.OK Find out more about cookies
Cookie privacy and policy
Necessary Always Enabled